It is mentioned in the document that the sensitive institutions took action in the Mirpurkhas Board on receiving the information and the records of the foreign students participating in the examinations have been obtained while the board officers set fire 3 times to dispose of the records.

It has been revealed that the necessary documents for foreign students are also not available. On the other hand, the officials of the Department of Boards and Universities confirmed the matter and said that the matter is sensitive and therefore they are investigating with caution. Strict action will be taken against those involved in the incident. 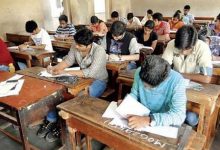