A video of Mashi Khan is going viral on social media in which he was seen talking to private media and expressing his views about PML-N actress Effat Omar including Aamir Liaquat.
Mashi Khan said that Aamir Liaquat had a personality, he was a great host, and he was a scholar.
During the conversation, the actress imitated Aamir Liaquat and reminded him that I am going out. So what happened now, who stopped you? 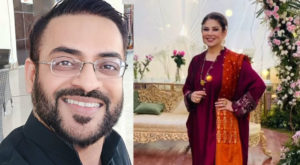